About the Fossil Tracks Collection

The University of Colorado Fossil Tracks Collection is comprised of a remarkable range of fossil footprints that show exceptional temporal, taxonomic, and geographic breadth. The collection includes approximately 3,000 original or replica specimens of footprints and trackways from 24 countries and five continents. It also includes more than 1,650 full size acetate footprint and trackway tracings. While some large specimens represent a single footprint, others are slabs that include dozens, or even hundreds of footprints. Most of the specimens are from the Mesozoic, when large extinct dinosaurs dominated ancient ecosystems (~252 to 66 million years old). However, the collection also includes nearly two hundred Paleozoic specimens (tracks from 400 to 252 million years old) plus more than 250 specimens from the Cenozoic (~66 million years to the present). Dinosaur tracks make up over half of the collection--including roughly 40% non-avian dinosaur tracks and 10% bird tracks. Crocodylomorphs and pterosaurs are also well-represented, and tracks from arthropods, turtles, rodents, hominins, and other mammals round out the collection.

Although the University of Colorado Museum of Natural History had a small number of fossil tracks before 2012, the present collection was largely built through the efforts of one man, Martin Lockley. Professor Lockley spent his career at the University of Colorado Denver, studying footprints and building one of the world’s most diverse and extensive collections of fossil tracks. Much of Professor Lockley’s research has focused on numerous track sites in the Rocky Mountain region. However, he has also examined fossil footprints and collaborated with colleagues at far-flung sites all over the world. This research has led to the publication of more than 400 research papers on fossil tracks. 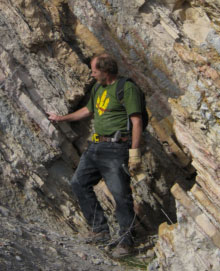 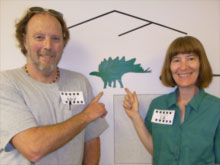